Former USCG Station Quoddy Head was privately purchased by Bill Clark in May 2000. The property then consisted of 3 USCG buildings on 5 acres. Having visited Maine since the 1960’s, Bill was fishing around Grand Lake Stream, had some downtime [too windy!], and took a day trip to Lubec and Campobello. Immediately taken by Lubec, further visits found Bill in the right place at the right time when the de-commissioned Station came on the market. He had previously restored five 18th century homes, an 1820s barn and had developed and operated Randall’s Ordinary, a country inn featuring open hearth cooking.

Always historically minded, Bill learned about the heritage of the US Life Saving Service [USLSS] and the US Coast Guard. Over time, he researched and documented the specifics of the architecture and history of Quoddy Head Station. Careful, detailed restoration commenced in 2001, first on the Cabin [storage for lifesaving apparatus] and then on The Station House in 2002. Bill added a second floor to The Lodge [maintenance building] in 2003. Additional lodging was constructed in 2007, named The Camp, and The Keeper’s Cottage was finished in 2011. The Meetinghouse was constructed in 2011, now a private lodging. The Crews Quarters, closest to the ocean, opened in 2018. The Buoy Barn, with Port and Starboard, had its first guest April 2020. A new Office and Garage was completed in April 22. The Captains Quarters and The. Keepers House will be completed by Fall 2022.

West Quoddy Station, open year round since 2001, will have 12 buildings on 5 seaside acres hosting up to 75 guests by Fall 2022. We look forward to having you as our guests to experience the magic of West Quoddy Head. Quoddy Hall opened in June 2014, providing Bill’s residence and office on the first floor and a 50-seat event center on the second floor.

1871 Sumner Kimball, a Maine native who attended Bowdoin College, made chief of the Revenue Marine Service and Life Saving Stations. Kimball joined Lincoln’s Treasury Department in 1862 as Clerk with his law degree.

1878 The USLSS, with Kimball as General Superintendent, officially established.

2014 The Meetinghouse was constructed as an office and residence. In 2020, converted to single lodging with 4 bedrooms, 2.5 baths, 2 kitchens. 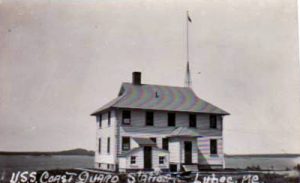 c.1919. A tower, topped with a metal enclosure for Coast Guard lookouts for boat counts, was erected on an opposite hill. Additional buildings were erected and demolished over the years, including a bosun’s buoy practice tower. 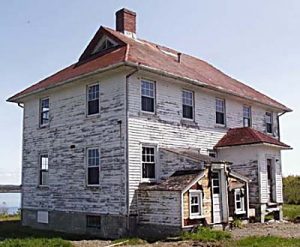 C.1930 3 bay boathouse built with winch and 3 track marine railroad extending 200’ into the bay. The boathouse was used for maintenance and storage. 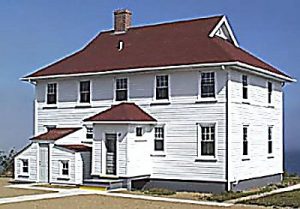 1975 In a Coast Guard ceremony, Hopley Yeaton was exhumed from from his North Lubec burial plot. His remains had an honor guard overnight at Quoddy Head Station before being interred for 10 months at west Quoddy
Light House. USCG Barque EAGLE carried his remains to the Coast Guard Academy at New London, CT.
1976 Hopley Yeaton interred in a crypt outside the Academy Chapel as “Father of the United States Coast Guard.”

1984 West Quoddy Biological Research Station established by Dorothy Spero for Marine Mammal Sounds, Research and Recovery. All 4 buildings are utilized. Closed due to lack of funds during mid 90’s. Back to GSA.

1990 West Quoddy Lifesaving Station nominated and accepted on the National Register of Historic Places as a Private Historic District.

1998 Quoddy Head Station purchased from GSA through litigation by a private individual and the SSA.
West Quoddy Station, Lubec, Maine
2000 Bill Clark purchases 3 Coast Guard buildings [on hill] and 5 acres for restoration as an adaptive reuse for lodging. Buildings had been gutted and were in tear-down condition without utilities.

2003 The Lodge, with 4 units, completed by adding a second floor to the 3 bay former maintenance building.

2006 The Camp built as a reconstruction of an 1849 Cape Cod Lifesaving Boathouse with 1 bedroom.

2011 The Keeper’s Cottage built as a reconstruction of the 2 bedroom 1808 West Quoddy Light House Keeper’s home.

2014 Quoddy Hall erected for owner’s residence and office. There is a 50-seat event room on the second floor. The building is in the form of an old schoolhouse/meetinghouse, complete with bell tower.